Our Goal
To improve the educational environment for teaching and learning by providing all San Ramon Valley Unified School District students with safe, comfortable and modern learning facilities.
About Us
The Facilities Development Department deals with the construction and renovation of the district's facilities as well as enrollment tracking and planning for capacity. Construction services include overseeing planning, new construction, major renovations, modernizations, and projects. Enrollment tracking and planning strategies include identifying and evaluating goals and providing students and teachers an optimal learning environment. 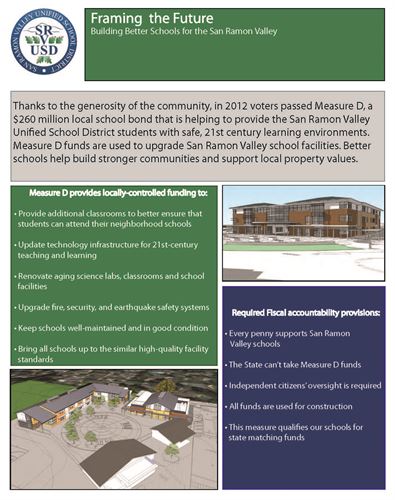 Measure D is a $260 million local school facilities bond measure that was approved by voters in November 2012. The measure passed with a “super majority” of over 55 percent of voters in favor in keeping with the requirements of Proposition 39 (Resolution No. 01/12-13: Measure D).  The lower threshold for passage mandates that a citizen’s bond oversight committee be chartered to ensure that bond funds are properly expended. Proposition 39 also requires yearly independent financial and performance audits. In addition to the legal requirements, SRVUSD is committed to transparency in how the funds are spent and to strong communication with the community.
Bond Sales
The San Ramon Valley Unified School District is pleased to share that the final bond sale of the $260 million Measure D authorization was completed on December 3, 2018. This sale stands as the third and final bond series issuance of Measure D. The sale generated the final $60 million in cash proceeds required to finance Measure D facilities projects and captured incredibly favorable financial terms for our community. The interest rate and the payback ratio secured in this final sale continue the District’s commitment to keep the total yearly cost to homeowners at or below $75 per $100,000 of assessed valuation. An average interest rate of 1.90% across the $60 million in bonds, combined with a payback ratio of 1.08 or just $64.9 million, maximizes the amount of community tax dollars invested directly into Measure D facilities projects.
This final bond sale provided the necessary cash flow to complete two of Measure D’s largest projects, the new classroom building at SRVHS, and the new classroom and MPR buildings at Stone Valley Middle School. Additionally, the bond sale was used to complete the modernizations at Golden View, Montevideo, Ranch Romero, Vista Grande, Green Valley, Sycamore Valley, Alamo, and Twin Creeks Elementary Schools, and Charlotte Wood Middle School. SRVUSD thanks the community for supporting the investment in our school facilities by authorizing the Measure D bond program.
History of Measure D Bond Sales
The first of the four bond sales was completed in February 2013 with net proceeds of $75 million. On March 10, 2015, the SRVUSD Board of Education voted to take advantage of low bond interest rates and increasing property values to accelerate the 2012 Measure D Bond issuance plan. This decision moved up the completion of the Measure D program by an estimated two years.  By capturing interest rates at or near historic lows, this move resulted in reduced debt services for taxpayers.  The acceleration of the overall Measure D program, accomplished by issuing more bonds earlier than anticipated, avoided an estimated $8 million of project-cost escalation.
The Board’s vote authorized the issuance of up to $125 million in current interest bonds using the same conservative assessed value growth assumptions used in 2012 and maintains the $75 max tax rate. This reduced the number of bond issuances from four to three, with the final series issued in 2018. The $125 million was based on the construction needs and the desire to accelerate projects.
AUDIT REPORTS